The wind whistled and wailed, picking up snow piles on both sides of the freeway. My friend Hans’ tiny Honda CR-V rode the waves of sleet, which appeared as a ghostlike entity dancing with unpredictable twists and turns. I clung tightly to the stuffed hedgehog we’d brought along as he expertly dodged the snowy specter’s moves. The clouds hung steadily in place, hinting that these conditions would last a while.

As college students, we yearned for a breakaway on any three-day weekend. One memorable getaway, four of us embarked on a road trip to Ronan, Montana, where a grain silo converted to an Airbnb awaited us. Before this, the longest road trip I’d taken in Montana was a quick summer jaunt down to Yellowstone. I had no idea what a four-hour journey looked like in mid-March, let alone how much a Honda CR-V could handle. Having no clue how warm our Airbnb would be, we’d stuffed heavy blankets, pillows, coats, and the ginormous stuffed animal into the back, leaving a slim horizon of the rear view. We brought chocolate and oranges to snack on; our friends rode separately.

Somehow, Bozeman natives manage to keep you feeling safe in their vehicles despite tackling such unprecedented road conditions. I trusted Hans’ driving skills because he was born and raised in Bozeman, and seemed accustomed to speeding over 80 mph in a gusty snowstorm. Hailing from Chicago myself, I knew the brutality of driving in snowy conditions, but never fathomed battling the shifting terrain of the Rockies at the same time.

The initial anxiety I held as a passenger soon faded. Our friends needed to pick something up in Helena, so we stopped there and, per Hans’ recommendation, had lunch at Shellie’s Country Café, stuffing arguably the best biscuits and gravy Montana can offer into our mouths. Rich, moist biscuits smothered in country gravy induced a heavy food coma in both of us and the simple, cozy ambiance of the cafe was not helping us snap out of it. Eventually, the meal settled and we continued on our way, taking US-12 toward Missoula, where we hopped onto US-93 toward Ronan.

The longest stretch of our road trip loomed ahead. For two-and-a-half hours straight, Hans braved winds over 30 mph in a relentless blizzard. My stomach churned with a stabbing nervousness that we wouldn’t make it, especially as visibility lowered. Still clutching the stuffed hedgehog, my eyes shifted between the road and Hans, searching desperately for comfort in such treacherous conditions. He appeared very calm and collected, which I appreciated, because my mind seemingly raced faster than the gusts of wind surrounding us.

Hans and I began exchanging stories about our lives, which calmed me down significantly. As I relaxed into the storytelling, the blizzard lightened up. The uniform whiteness of the sky transformed into individual snowflakes, painting my window a unique and fluid mosaic. I listened to Hans’ story as I watched the light smattering of the snowflakes. Becoming lost in nature’s beauty, I didn’t realize we had arrived at our destination. Heading north on Highway 93 toward Kalispell from Missoula, a little town called Ronan might not catch your eye. Instead, looking to the east, the Mission Mountains stand proudly in view. The best part about being the passenger was the ability to gawk at all of Montana’s natural beauty. Traveling from one dirt road to the next, we found our converted silo Airbnb, which sat alongside a large, colonial-style home. Our friends had arrived about an hour before we did.

Inside the grain silo, described as “luxury” on the website, there was a king-sized bed with a bunk bed in front of it. A microwave and mini-fridge sat next to the door, and two huge windows flanked either side of the entrance. Despite looking cold from the outside, the silo felt well-insulated and cozy. A well-kept outhouse was only about ten feet away. Peering through the curtains from the inside of the silo, I could see a full view of the Mission Mountains. Because we arrived around five in the evening, the sun neared setting. We spent the night playing card games, chatting, and drinking IPAs.

To atone for all we drank the night before, the four of us set out together the next morning for Arlee, backtracking to get to the Garden of One Thousand Buddhas. Entering the Garden, I felt removed from your typical pastoral, Montana landscape. Little white Buddhas line up consecutively, forming a circle of white walls, all leading to a giant and colorful meditative chakra in the middle. Pinks, reds, greens, golds, and blues comprise the coloring on the central shrine, where a statue of Yum Chenmo sits peacefully.

We quietly observed and reflected here, reading proverbs carved into rocks scattered throughout the Garden. After traipsing about the Garden for about an hour, we headed north to Polson to visit the Miracle of America Museum. Sometimes, you happen upon small gems in Montana that you never forget, and the Miracle of America was definitely one of them. Adult admission cost $10, which allows you access to the whole museum. 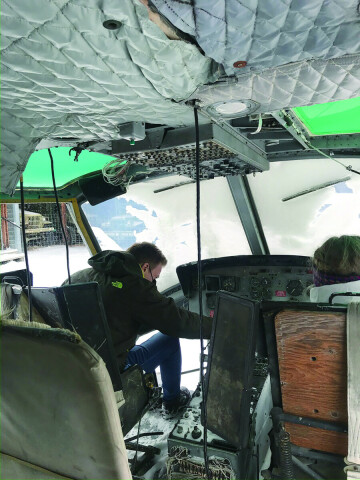 While it’s no Museum of the Rockies, Miracle of America definitely has its own charm. War memorabilia, old cars, planes, a fake little town, and a charming diner are some of the most memorable aspects of this roadside attraction. The fake village has several small businesses, including a doctor’s office, shoe shop, trapper’s cabin, and a few different barns. Before we knew it, three hours had passed, and we were still enjoying the random elements of this museum.

On our way back to Ronan from Polson, we stopped at a local grocery store and bought frozen macaroni and cheese to put in the microwave at the Airbnb. We settled into the grain silo after exploring the farmland surrounding the property, which featured a small barn and walnut-colored horse, to whom I fed an apple. After an amazing night of sleep, we separated into different cars and headed back to Bozeman. The day blessed us with clear, sunny weather, allowing us a couple more hours to relax before a stressful week of school.

Colleen Angarone is a senior at MSU completing an English-Writing major. She is particularly interested in Women and Gender Studies and Southeastern Asian culture, and plans to teach English in Japan one day.