Historic preservation is location-specific. A place is significant in association with the historic events or people connected to the property. Changes in the built environment, including landscaping, demolition and major remodels, make it tricky to understand where historic buildings were located. Historic place markers, like roadside signs and plaques, are an important component of public history. They usually mark a location and present a short text explaining the location’s historic significance.

In the spring of 2014, the City of Bozeman will partner with the Clean Slate Group on an innovative approach to public history that will also reduce graffiti in our community. The Clean Slate Group received a 2011 Beautification Award for the graffiti-resistant “wraps” installed on traffic signal boxes in Downtown Bozeman. The “wraps” are a 3M vinyl layer adhered to the signal box from which graffiti can easily be removed. The Downtown Bozeman wraps were printed with a combination of original artwork and historic images of the Main Street Historic District.

Signal boxes throughout the community will be wrapped during the spring 2014 project, creating an opportunity to tell the history of places outside of downtown Bozeman. Images will be joined by a short interpretative text. The Clean Slate Group installed two prototypes of the project in December 2013.

The first is located at the intersection of West Main Street and 5th Avenue. If a picture is worth a thousand words, the five images on this signal box speak volumes about the site’s history. The text explains the location’s relationship to the Nelson and Ellen Story Mansion, Gallatin County High School, the Gallatin County government and Bozeman architect Fred Willson. 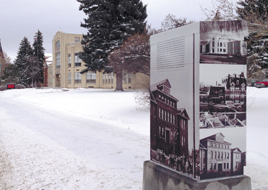 We worked with the Pioneer Museum to select photographs that include a still-recognizable landmark to help connect the historic image to the current view. For example, the image of the 1880 Gallatin County Court House (demolished and replaced in 1935) bears little resemblance to the current buildings on the site. But the Bridger Mountain Range in the background of the photograph is an obvious landmark.

The second prototype signal box is located at North Rouse Avenue and East Oak Street. Once an industrial area on the periphery of Bozeman, this location has become a key intersection in Bozeman’s street network. Transportation needs drove original development of the site during the first part of the 20th century. E. Broox Martin established the Bozeman Milling Company at this location by 1904, in the buildings where Planet Natural store is now located. Bozeman Milling shipped flour and grain via a spur line to the Northern Pacific Railway to the east across North Rouse Avenue.

In 1917 the Bozeman Pea Cannery opened for business in what is now the 406 Brewery buildings. This facility employed 275 people and was one of six seed pea canning companies in Bozeman during the 1920’s. The industry triggered a commercial and residential building boom in Bozeman, including multi-unit apartment buildings like the Clark Apartments at 616 South Grand Avenue and the Blackmore Apartments at 120 South Black Avenue. Employees used the streetcar from the Gallatin County Fair Grounds to commute to and from work. The Bozeman Pea Cannery shared a spur line with the Bozeman Milling Company until the businesses bankruptcy and subsequent closure in 1962.

Some of the traffic signal boxes are located in areas not usually thought to be “historic.” The signal box at West Oak Street and North Seventh Avenue will be included in the public history project. North Seventh Avenue became an entryway to Bozeman during the mid-20th century, when automobile transportation eclipsed streetcars and trains. First as the road to Belgrade, then as a connection to Interstate 90, North Seventh Avenue developed as a car-oriented commercial area. In fact, for a short time in the early 1960’s, travelers had to detour from I-90, south on Seventh Avenue, then East on Main and back onto I-90 while the road section between the North Seventh and East Main interchanges was under construction.

As a result, motor court hotels (later shortened to “motels”) like the Rainbow Motel, the Royal Seven and the Rambler Motel (now known as the Bozeman Inn) developed to provide lodging facilities for travelers. Across I-90 the Starlight Drive-In provided a venue for movie-viewing from the comfort of the family car. Vintage images of all of these properties will be incorporated into the vinyl wrap on the 7th and Oak signal box.

Images from Montana State University Special Collections and Archives will be used to protect signal boxes around the MSU campus. The signal box at South 19th Avenue and West College Street is a fantastic location to use an image of “College Hill” taken from the same vantage ca. 1912. The photograph shows the isolated MSU campus surrounded by farm fields.

It’s not often that historic preservation melds with Public Works. Public Works Director, Craig Woolard, is excited for the anti-graffiti benefits of the vinyl saying, “Working with Clean Slate Group allowed the City of Bozeman to solve one of our more difficult problems (graffiti) with an innovative product that beautifies the community at the same time.”

In total, fifty-one traffic signal boxes will be transformed by next summer, of which a third will incorporate historic images. Local artists are encouraged to watch for opportunities to participate with Bozeman’s efforts.

The SAE’s and the Story Mansion