A monumental loss. My singular interaction with Armando Chick Corea stands as one of the most profound experiences of my musical career.

The year 1984 was a time of incredible, creative music flow. My career as a “drummer of note” was catapulting me into some of the most envied musical situations in Los Angeles. Approaching my 25th year, I had a four-year-old daughter to love and another on the way as I was finding my niche in the “business of music.” 1984 was also a time of tremendous turmoil. With the creative flow came a tumultuous emotional and mental ebb. The good and bad, the wax and wane construct the wheel of our lives. And as my musicianship “cred” began to elevate me, my state of wellbeing and the framing in my mind were slowly but surely disintegrating into a state of self-destruction and dissolution.

I was fortunate to be aligned with some of the best of the best of the Los Angeles jazz scene: Mike Garson, Jamie Faunt, Shelby Flint, Sunny Wilkinson, Josh Hanna. . . . I could go on and on as my ether mind slips through the memory of the incredible musicians I had the opportunity to play with during this period of time. I was making my way through the jazz venues of Los Angeles, including At My Place, Two Dollar Bill’s, The Sound Room, and Donte’s. These clubs became my sanctuary and also my home away from a house that was not home. My marriage was an unmitigated disaster. My first daughter and the gift of a second daughter on the way were the only things holding my life together at that point. My escape to the sanctuary of jazz clubs provided me the respite necessary to recover from the dismal situation that I found myself in. They became my saving grace. I also found very short-lived escapes with various pills and potions. It wasn’t long before the escape into various pills and potions eclipsed the sanctuary of beauty embodied in the wonderful musicians with whom I was so grateful to be performing.

Mike Garson was a mainstay of my life during that period of time, and he presented me with many wonderful opportunities to expand my musical horizons. For those who are not familiar with Mr. Garson, he was the brilliant keyboard virtuoso who performed with David Bowie for over 30 years. A Classically trained musician, Mike could find his way around any style, any modality of playing, and any keyboard instrument. I don’t use the word “brilliant” very often when referring to musicians: Mike Garson is a brilliant musician.

Mad Hatter Recording Studios was Chick Corea’s creative workshop and became the place to record innovative music. Filled with Chick’s energy and enigmatic field, musicians have graced this storied studio in Los Angeles for the past 30 years, making incredible records and enhancing their creative acumen. Mike and Chick were close friends during this period of time and with that friendship, Mike had the opportunity to turn Chick on to many remarkable musicians. 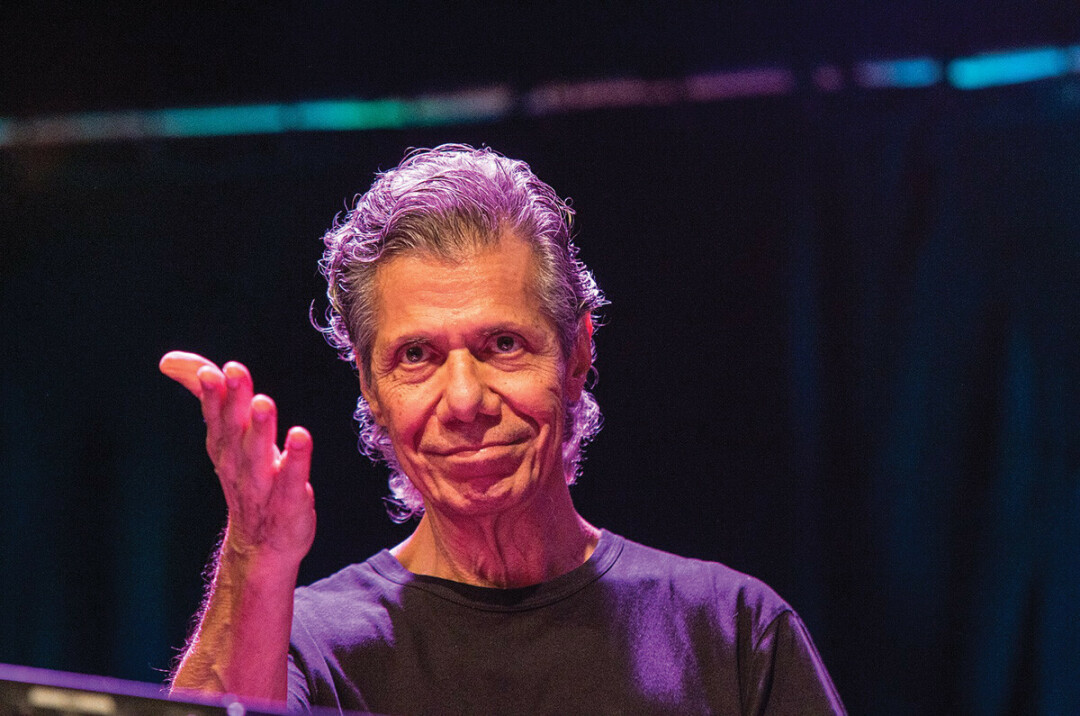 Chick was hosting an open house at the studio and asked Mike and Jamie Faunt to perform at the event. I was asked to play, with the added bonus of a chance to casually perform with the great Chick Corea. I knew that Mr. Corea was engaging with many of the best Los Angeles musicians to find the perfect combination for his Elektric Band project. My dear friend Mike Miller, who played in a particular manifestation of the Elektric Band down the road, once told me, “Every single night, every show that I played with that band, I was nervous as shit. But Chick always made me feel at ease.” Well, given this particular opportunity, I was “nervous as shit” as I made my way to Mad Hatter Studios, knowing that I would be meeting Chick Corea, possibly having the opportunity to show him what I was made of. I felt so ill at ease that evening that I felt the need to stop at a “dear friend’s” house, also referred to as my “dealer,” to pick up some pills and potions for the occasion. Feeling fortified and emboldened, I walked into the studio as if I effen owned the place. But during that period of time in life, I couldn’t own anything except my self-centeredness and my overall disgust with my life and myself.

I got through the brief performance with Mike and the trio, and then, around 7 o’clock that evening, it was time for Chick to take center stage. Jamie and I were invited on stage to join Chick for what should have and could have been a beautiful, flowing “500 Miles High” and a searing rendition of “Spain”—two of my favorite songs that, in a perfect and sober world, I could have played the shit out of. But my world was suddenly and decidedly imperfect, and definitely not sober. I sat across from one Chick Corea, looking directly at me—he with a twinkle in his eye and me with a deep, dark, stark look of desperation. He played one of his beautifully long-winded intros to the tune and then began to establish some time. I followed suit, but my “suit” was ragged and poorly worn. By the time we were 16 bars into the intro, it was painfully apparent that I wasn’t fit to play with Adam Sandler’s Wedding Singer character, much less with the great Chick Corea. Chick stopped the song, got up from his piano stool, walked over to me, bent over, and whispered in my ear these exact words: “Michael, it appears as though you’re having some trouble this evening. Just play some simple time, and we will get through this thing.” It’s a moment in my musical life that I will never, ever forget.

Needless to say, I wasn’t invited to stick around for the playing of “Spain,” and my hopes of being the “jazz guy” were dashed in a seven-minute musical sound bite. As I reflect on this very difficult time, one of the most harrowing for me to recall, I look to a star. Chick was amazing, and as the guests started to filter out of the open house, he came over to me, sat down, and took some time to find out what was going on in my life. I believe I shed a couple of tears, and I told him how sorry I was that I ruined that particular moment. He looked at me with a soul-searching vision and said, “Michael, you’re at the very beginning of what is going to be an illustrious career. Stay the course and just know that there will be many other ways for you to dedicate and prove yourself as the incredible musician that I know you can be.”