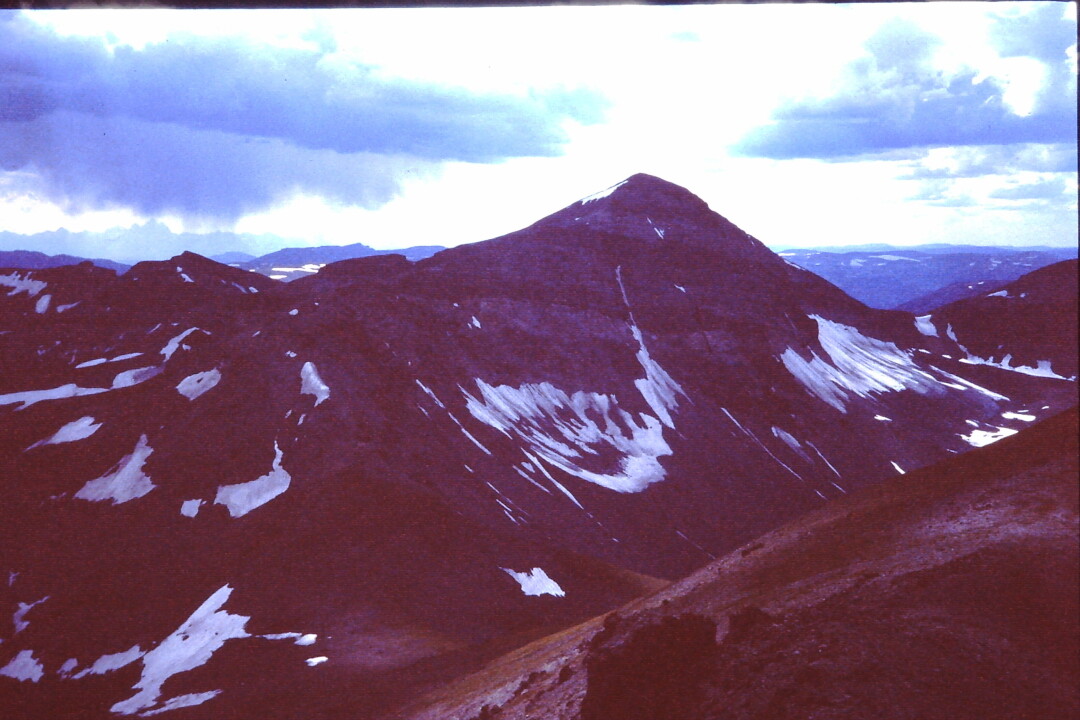 Younts Peak - Phil Knight
Have you ever spent a night in a tree, listening to an angry grizzly bear growl in the woods? Or been nearly swept over a cliff in a swollen stream you were trying to cross? Or had to crouch in “lightning position” as massive bolts of electricity hammered the ridge just above you? Or navigated by map and compass as you traveled for days off-trail through trackless mountains? Been driven to near distraction by biting flies and mosquitos? Run out of water while hiking flat black-sand roads in 90 degree heat? Perched on a high windswept peak and gazed across endless waves of mountains without a sight nor sound of other humans?

My wife, Alaina, and I experienced all this and more thirty years ago, when we embarked on what we called the “Walk for Wild Yellowstone” – an attempt to circumnavigate the Greater Yellowstone Ecosystem on foot. As far as we knew no one had done it before, and we wanted to take on a challenging, remote and extended backpacking trip, on a new and untested route.

So after months of planning and preparation, we locked up our apartment and on July 1 started hiking south from the Grotto Falls Trailhead in Hyalite Canyon. Ahead were ten weeks of wild mountain ridges, remote campsites, river crossings, bliss, terror, exhilaration, exhaustion, and sheer adventure. This ambitious 640-mile hike also welded us into a unit, and though we were not married at the time we did get hitched 5 years later. There’s nothing like living together in a little tent for ten weeks to test your relationship!

I discovered just how determined and tough Alaina is as she carried a huge pack over countless passes, suffered through almost constant foot and ankle pain on our trek, went through several pairs of boots, survived serious insect harassment, dealt with the danger of grizzly bears, and put up with my restless ways. She showed me what partnership means, as I became very lonely when she took a three-day hiatus from the hike to heal her tendonitis. She showed back up at the next food drop laden with edible luxuries, smiling and bursting for adventure. I would never have made it very far on this trek without her. The Walk for Wild Yellowstone is an important reference point in our lives, reminding us what we are capable of.

Our route took us through the wildest parts of the Gallatin and Madison mountain ranges, across the Targhee Plateau into Yellowstone’s Cascade Corner, down the length of the Teton Crest Trail, through the Gros Ventre range and north up the length of the magnificent and wild Absaroka Range. Although we did not connect the trip into a full loop we made it to Pine Creek trailhead outside of Livingston by September 8, just beating the first cold rainstorm of fall.

The purpose of this journey was twofold: First and foremost, to experience and become more familiar with the Yellowstone Ecosystem, one of the world’s wildest temperate ecosystems, and secondly, to publicize the importance of protecting this place and to directly inspect, document, and publicize some of the problems found here.

We discovered just how wild Greater Yellowstone still is, and how threatened. Back then, wolves were extinct in the Yellowstone region, as they were not reintroduced until 1995. Many areas we visited, such as the Gallatin Range and Taylor Fork, were still raw and bleeding from decades of logging and road building frenzy by the US Forest Service and by Plum Creek Timber. Other places were threatened by industrial gold mining. Grizzly bears were still at low numbers, supporting maybe half of the 700 bears the ecosystem supports now.

Off-road vehicles were gaining traction as a recreational pursuit, meaning motorcycles and ATVs were showing up in the remotest areas. Outfitters were building huge hunting camps in the wilderness and leaving heaps of junk in what was supposed to be total wild country.

We also learned how generous people could be as a number of folks helped us along the way. Rides, food drops, route advice, extra food, trail companions…when you see few people on a daily basis you appreciate them a lot more.

But there were a lot fewer people around the area than in 2021. We found plenty of solitude and at times saw no one for days of hiking. We ambled across some of the most stunning high elevation country in North America, free as the wind, on our own schedule. We lived simply, carrying everything we needed on our backs, cooking basic dried food on a little one burner camp stove, sleeping in a cheap dome tent someone had given us.

Through mile after mile of walking over rough terrain, sometimes crossing three passes a day, scaling peaks for the sheer hell of it, crossing rivers without bridges, carrying up to 70 pounds on our backs, and balancing across knife edge ridges, our bodies became lean and mean. Alaina called the trek “The World’s Most Scenic Diet.” We both called it the trip of a lifetime.

You too can still take on adventures like this. Find your own route, or follow well worn paths. It does not matter; the main point is to go. I heard just this year from a fellow who had read my book, Into Deepest Yellowstone, about our trek, and done a very similar journey himself in 2020. He talked about another man who had also followed some of our route on a 1,000-mile trip around the Greater Yellowstone.

Here’s an excerpt from my book Into Deepest Yellowstone:
It was a steep grunt with our immense packs, but before long we topped out at nearly eleven thousand feet, panting and gasping at the great sweep of tundra before us. Suddenly we could see clear across the huge, wild, mysterious plateaus of the South Absaroka. Far in the northern distance, rising haughty and alluring, were Younts and Thorofare Peaks, twelve thousand footers at the Yellowstone Headwaters. To reach them we had to cross some very high, rugged, exposed terrain. It looked intimidating, but exciting. We could also see much of the Wind Rivers, Gros Ventres and Tetons. It was too much to take in.

Eager to find a lake and make camp, we scurried away northward, and were rapidly halted by an unexpected cliff! Here we learned a quick lesson about how deceptive these plateaus can be. They look smooth and rolling until you try to walk across them. Sudden challenges like this one appear before you, making you work for your miles. We did manage to descend this precipice via some steep, loose scrambling, none too pleasant with the pigs we carried. Another climb got us to a spot above steep, tall, broken cliffs, where we enjoyed a fabulous view of the whole wild upper basin of DuNoir Creek. What a gorgeous place. I could not believe it has not received Wilderness protection. But there is a lot of forest in there, and some people would like to build roads into this place to log it. Naturally. What else is forest good for? We wandered a bit farther, feeling our loads, and spotted a little tarn tucked into a depression out on the edge of the plateau. We tucked ourselves into a spot of stunted forest above the lake, where we could gaze northeast across our intended route or walk over to the cliff edge to look two thousand feet down to the treetops in the quiet, immense space of the Dunoir.

As we made dinner a storm came rumbling and crashing through, reminding us of the potential dangers of the exposed crossing we were beginning. It was a fine evening regardless, though food-hanging was an ordeal with two weeks worth to hoist in little trees with small branches. In the dusk, as we were preparing for bed, an owl swooped close by our heads, leaving me with a vague feeling of impending danger. During the night I got up to pee, and, while engaged in this mundane act, observed the ever-fascinating trails of meteors; mysterious visitors from the wide universe burning out their last seconds in an unavoidable encounter with Earth. At sunrise a much tinier but no less fascinating visitor came to call: a hummingbird. For once we managed a truly early start and launched into the vast unknown of the South Absaroka.

So what are you waiting for?